Lions robotics team ends its most successful season yet

The San Diego Jewish Academy robotics team competed in its first meet of the season on Sunday, December 15th, following their 7th place win in a meet the previous year. The well-oiled machine, led by co-presidents Jesse Gan (‘21) and Noah Katcher (‘20), has worked hard to improve both its robot and their code. 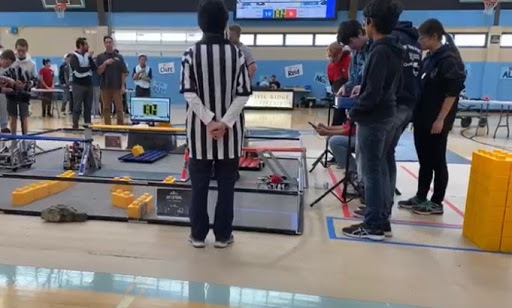 The team intently watches their robot at their first meet on December 15, 2019. Photo by Micheala Simble (21’).

The team started preparing for meets months in advance, coming together on Thursdays and Sundays to work. Mr. Patrick Hagerman, SDJA science teacher and the faculty adviser for the robotics team, says that they “have always had a strong building team; the mechanical engineering side has always been strong. We have focused a lot of energy in the past few years on improving our fundraising and marketing. We have been trying to raise our profile, not just on campus, but around the area.”

The team is made up of different subgroups. Captains Gan and Katcher oversee the work done by all the groups. The builders, led by Jed Edelstein (‘21), construct the robot from scratch. The coders, led by Devin Marcus (’22), focus on the autonomous portion of the game; they make sure the robot can move without anyone manually driving it.

Ron Gneezy (‘21) leads the wiring team, who are “basically the middle ground between the code and the hardware,” explains Gan. Yin Wenduo (’22) leads the crew that sets up the field for practice, so they know the rule manual inside and out.

The team has recently added Ariela Cohen (‘21) to their marketing team. Ariela, who joined in mid-September, describes her experience as “fun and interesting. I don’t think that people realize that there is more to it than coding.”

One of the marketing team’s most recent projects was designing the annual hoodie. The team reaches out to donors every year, and wears their logos on the hoodie during competitions. Micheala Simble (21’), who is leading the marketing effort this year, joined the team during her freshman year. She describes her experience as, “a fun way to connect and learn from the people around me in an exciting environment.”

Excitement seems to be a common theme among team members when discussing their experience. Ariela Moel (‘22), team note-taker, describes the December 15th meet as “a collaborative team effort. You feel nervous. No one feels prepared because we don’t know which team will be paired with us, but we are always excited to find out.”

Lions robot builders have competed in four meets this season. The final one was held on Sunday, February 9, in the SDJA gymnasium. Adviser Mr. Hagerman noted, “I was very proud of our team this meet. I think we had our best technical performances.” The team is continuing to work hard during their off-season, and are ready to score higher than ever in the coming year.

View all posts by sdjajournalism