West coast, “best” coast, East coast, “beast” coast. The iconic struggle between the East and West Coasts can be traced back to the 90’s with the legendary Death Row Records which represented Tupac Shakur, and Bad Boy Records which produced Notorious B.I.G. Although this rivalry turned violent and quite tragic, the beef today between the two seashores is enclosed by buns and is drenched with a “secret” sauce. This clash has materialized into the In-n-Out versus Shake Shack battle.

Recently, Shake Shack has forced itself into California at the Westfield Mall of University Town Center, and while many San Diego Jewish Academy students are willing to give it a try, most know that it can never become part of what  Jose Galicot (‘19) calls the “Cali vibe.” He also says that when he walked into Shake Shack “something just didn’t feel right.” He describes Shake Shack as “just there” and with “no good vibes.”

In-N-Out has been notoriously known to be “the perfect way to end the night”, as Sion Memun (‘19) puts it. There’s nothing better than eating a decadent and juicy burger after a long night out. The decorum of In-N-Out adds to this feeling as the familiar bright reds and yellows, and the 1950’s diner themed aura would give any Californian a comfortable, homey feeling. “Everyone there has the same mentality,” Sion states, “to have fun and have a good meal”. 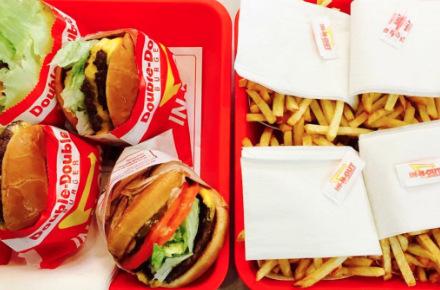 In war terms, one could describe the In-N-Out burger as Machiavelli, willing to break the rules to get what it wants, while the Shackburger would be Sun Tzu, determined to follow certain rules to get the best results. As Shake Shack declares on its website, “sourcing high-quality natural ingredients, cooking food to order, and placing a major emphasis on the happiness of its customers and employees” are the keys to a great burger.

The war begins on the battlefield called the tongue. The intricate and nuanced Double-Double, “Animal Style” Cheeseburger, which Jack Hanlon (‘21) describes as “just better,” strikes first with its toasted buns and crisp lettuce, cut into triangles, that provide a satisfying crunch, while the simplistic Shackburger, which Mia Hansen (‘20) calls “original and different,” fights back with a pillowy and supple bun that gives the burger  a softer bite than the competition’s burger. The melty, bright yellow American cheese and the “secret” sauce (mayonnaise, ketchup, relish and vinegar) add a layer of smooth creaminess to the “Animal Style” burger, but the ShackBurger’s sharp American cheese and “shacksauce” (mayonnaise, mustard, ketchup, dill pickle brine, and cayenne pepper) highlight the level of the burger’s creaminess.

The cavalry, also known as the patty, is Shake Shack’s best army unit. It is made up of a blend of first-rate, natural meats, whose quality can be tasted from the first bite, hence the more expensive price ($8.09), while an In-N-Out Double-Double is cheaper ($3.45). However, the secret to the success of the In-N-Out patty is the light brush of yellow mustard as it cooks, that gives the meat a nice, flavorful, but overlooked crispiness. The brown, finely chopped, caramelized onions insert a bed of sweetness into the burger, while the pickles, (the most underrated part of a good cheeseburger), give it a much needed acidity and crunch. In response, the Shackburger employs fresh and juicy and colorful, plum tomatoes.

For Californians, In-N-Out is clearly the victor, as the refined burger and the familiar setting, “hit the sweet spot” as Jack Hanlon (‘21) puts it. However, only time will tell who the national winner is. On the other hand, though, Whataburger, a popular Southern and Midwestern burger chain, has inserted itself in this burger battle, and its defeat is only possible if the East and the West join forces, and so as Sun Tzu said, “It is easy to love your friend, but sometimes the hardest lesson to learn is to love your enemy.”