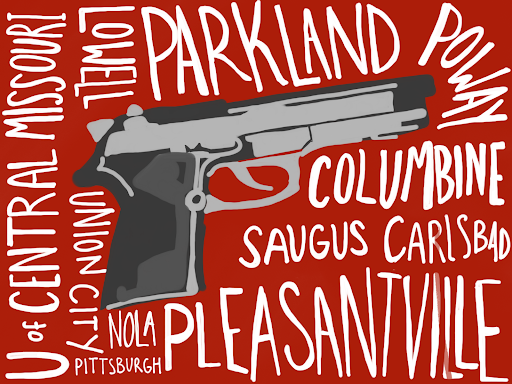 “16 seconds is all it takes for a 16-year-old boy in Saugus High School to take a .45 handgun and shoot five of his fellow classmates,” Rabbi Frank somberly remarked at an SDJA high school Kabbalat Shabbat on November 15.

In the crowd, students barely seemed surprised because school shootings have become commonplace in the United States. Since the Columbine High School shooting in 1999, an estimated 223,000 students have experienced school shootings. Although these numbers may seem unfathomable, an accidental code-red lockdown at SDJA on November 7th reminded everyone that a school shooting is not inconceivable.

“I was kind of prepared because I had done lockdown drills at my old school,” Sivan Gabai (‘23) explains, “But when I got inside everyone else was very serious about it so I didn’t know if it was real or fake.”

Thankfully, Ken Freshwater, Director of Security and Safety, soon realized that the alarm, which initiated the lockdown, was triggered by accident—no actual threat was present at the school.

This isn’t the first time both faculty and students dealt with the repercussions of gun violence. Just two years ago, they initiated a walk-out on campus after the infamous shooting at Stoneman Douglas High School in Parkland, Florida that claimed 17 lives. 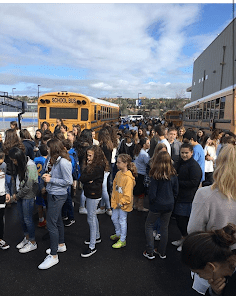 SDJA students show solidarity with victims of gun violence during the SDJA walkout in March, 2018

But many schools around the country have come face-to-face with real danger. Most recently, Saugus High School in Santa Clarita, located just north of Los Angeles, suffered a school shooting on Thursday, November 14.

Although many students don’t have a direct connection to Saugus High School, Hannah Moel (‘20) says that “everyone knows somebody who knows somebody” who has experienced gun violence first hand. As it turns out, this is true even within the SDJA community; Eli Lerner (‘21) comments that his camp counselor witnessed both the 2019 Poway synagogue shooting  and the Carlsbad Elementary School shooting in 2010.

Mass shootings have become an American phenomenon and are occurring faster than the nation can process. The day following the Saugus High School Shooting, Pleasantville High School in New Jersey experienced a school shooting of its own in which two boys and a man were shot;  one of the boys later died. On a Saturday morning, November 16, a man in San Diego shot his wife and three children before turning the gun on himself.

“It’s been less than 24 hours since you interviewed me about the Saugus High School shooting, and now we see gun violence yet again. This time even closer to home,” Moel states.

Another issue is the fact that some of these shootings can become lost in the media. Shootings seem to occur at such a rapid pace that they almost inevitably cease to shock the public or raise much concern.

Since the first day of the school year, on August 20, shooters have shot, killed, and wounded students at 23 different schools throughout the nation. On August 30, during a high school football game in Mobile, Alabama, ten teenagers were shot and injured by a 17-year-old young man. Less than two months later, on October 9, two men in Lowell, Massachusetts used BB guns to open fire at kindergarteners. Five children were hit and two were taken to the hospital. On November 4, a student at the University of Central Missouri in Warrensburg, Missouri was shot and killed after a gun was accidentally discharged. Not even two weeks later, on Sunday, November 17th, in Fresno, California, two gunmen snuck into a house party and opened fire; four people were killed, six wounded. On a Saturday morning, November 24, two boys, aged 11 and 14, were shot and killed outside an elementary school in Union City, California.

“It is time to wake up and ignite the change that is necessary.” Jessy Podolsky (‘20) says, “There’s not a single solution that will solve this, but we definitely need more gun regulations.”  Jessie Gan (‘21) adds, “There should be emotional regulation of those who own guns already, although it is important to not cross the line of invading privacy.”

Following the mass shooting that took the lives of 22 innocent shoppers at Walmart on August 3, 2019, in El Paso, Texas, a beautiful memorial was unveiled. Called the “Grand Candela,” this memorial shines as “a beacon of hope for the survivors, and a lasting reminder to all of the enduring strength, resiliency and love that unites El Paso,” the plaque reads.

“At the end of the day our lives are on the line,” Joshua Miller (‘21) explains, “and sadly we don’t see much being done about it.”

Since January 2019, over 440 innocent people have been brutally shot and murdered in the U.S.A., and the numbers only seem to be increasing. As this article was being edited for publication, two more tragic shootings occurred in the United States. On Saturday, December 8th, a Saudi Arabian air force lieutenant studying in the U.S. opened fire at the Naval Air Station in Pensacola, Florida resulting in three deaths and leaving another eight people wounded. And on Tuesday, December 10, two gunmen in Jersey City, New Jersey murdered a policeman near a cemetery and three civilians in a Jewish grocery store before being killed by police in a violent shootout.